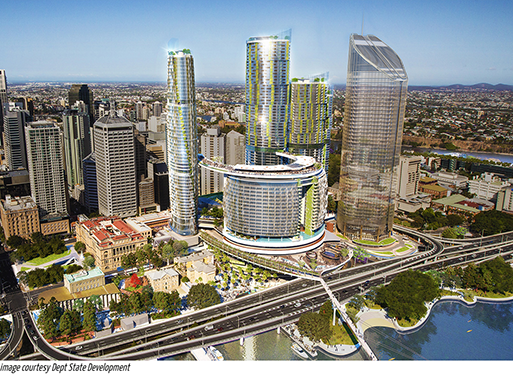 If you work in the construction industry in Brisbane, this is one project that is going to have an impact on you either directly or indirectly. In what’s been termed “the largest single development application in Queensland’s history”, Queens Wharf’s plans have been lodged for approval and a public consultation period will soon follow. The scale is enormous – $3 billion and approximately 10% of our CBD’s land area – the largest private sector development in our state. So, like it or not, inner-Brisbane will change as a result.

Yes there will be construction noise and dust and traffic headaches that won’t finish until around 2024. Probuild was announced as the successful tenderer for the Queen’s Wharf Brisbane demolition works. This demolition is already under way with the creation of around 150 new jobs.

About $2 billion worth of building contracts for the giant Queen’s Wharf project will be up for grabs early next year in a much needed boost for the construction sector.

Mr Crooks, who will oversee the project being built by Star Entertainment and Hong Kong-based partners Chow Tai Fook Enterprise and Far East Consortium, said information on a selective tender for major construction firms would soon be released.

These major firms would then contract the work out to smaller firms and subcontractors as the project progressed. It’s estimated that about 2000 workers will be involved during the peak of the project.

Other benefits of Queen’s Wharf Brisbane include:

It has a casino at its core, and it will add another 2000 new apartments to a high-rise residential construction market that’s been running hot for some years now.

The Sky Deck is the centrepiece of the project’s imagery so far, perched 100m high it’s got clear parallels with Singapore’s Marina Bay Sands. Along with 1100 hotel rooms this will be a tourism icon that will help Queens Wharf attract an extra 1.39 million tourists to the city each year. A $1.69 billion increase in tourism spending for our state. The casino has been the focus of public concern, but if you’ve visited Marina Bay Sands their casino is tucked away, dwarfed by the shops and activity of a bustling and vibrant entertainment precinct. At Queens Wharf the casino will be around 5% of the built area so a similar outcome seems likely.

There’ll be lots of public open space to connect the CBD with the river, bringing life to that neglected space under the Riverside Expressway and mirroring the waterfront activity of South Bank, (Queens Wharf is actually bigger than South Bank – its 27 hectares adding to the 17 hectares on the southern side of the river). A new pedestrian bridge will link it to South Bank, right in front of The Wheel, connecting both sides of the river with the Botanic Gardens and parliamentary precinct back to Queen Street. Combined they offer hosts of boardwalks, parkland and places to get outside.

There are elements of other famous public spaces from around the world, but for locals there is an exciting shape of an emerging Brisbane in the approach. It embraces the outdoor lifestyle we treasure so much – on the Sky Deck and at the ground, and integrates important history of its neighbourhood. It will be a place to bring residents and tourists together, and provide a focal point for visitors to our city.

If you can spare the 21 minutes this video on Queens Wharf is well worthwhile. Or try the quick fly-around for a sense of the scale and architecture.